Sedimentary Rocks form from small pieces of rocks, just like pebbles, called sediments.  Sediments will tumble down a hill into a lake, ocean or river and start to compress together from the pressure in the water.  In this section you will learn all about Sedimentary rocks and different types of formation. 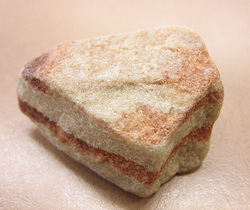 When sediments are pushed and squeezed together they are being compacted together.  Think of a garbage can and how when you compact the garbage, it becomes squished together to become one big rock.  The entire process of sedimentary formation is called compaction. An example of a compacted rock is Sandstone.

When sediments fall into water they sometimes form another way.  Because of the abundance of dissolved minerals in the water, the sediments are able to be glued together by minerals.  This type of sedimentary formation is called cementation.  An example of a cemented sedimentary rock is coal
Powered by