_Believe it or not, the ground is moving under you right this second!
Every day the crust's Tectonic Plates are moving in all different directions, causing them to force one another under them, rip apart, or rip off chunks as they move past each other.  This section is on earthquakes, everything you will need to know about how they work. 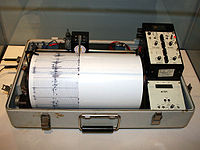 Seismic waves are the waves released by a rock or plate after they break.  When a rock or seismic wave plate breaks, it releases energy called seismic waves.  There are three types of Seismic Waves each with is own unique characteristics.

Primary waves are the fastest and least felt of all earthquakes.  Although they are the least felt they can make dishes rattle, and make a warning sign as to the bigger waves to come.  These waves can also travel through any state of matter on earth.

Surface waves are the slowest out of all three waves but they are also the strongest.  These huge waves travel in a rolling motion ripping up the ground a causing buildings to crumble. 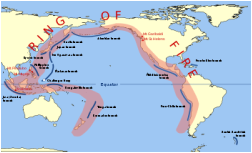 The Ring Of Fire is where a lot of the plate boundaries are.  Because of this there are many earthquakes going on and lots of volcanoes being formed.

Normal faults occur at divergent boundaries.  When this type of fault happens one of the two plates moving apart will suddenly slide under the earth causing an earthquake.

Reverse faults occur at convergent boundaries.  This type of fault causes the rock/plate above the fault line to be forced up causing more earthquakes.

Strike Slip Faults occur at transform boundaries and is caused by edges of a plate sticking out as the plates slide past each other.  When the plates get caught on one another they push and pull until eventually the excess rock breaks off causing mass amount of pressure to be released making earthquakes.
Powered by