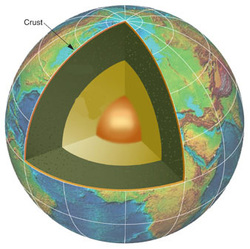 The Crust is our home, yet it is also not our home.  The very top of the crust is where we live on but deeper down it is all dense rock and metal ores.  In this section you will learn about what the Crust is made of, the temperature, the thickness and a few interesting facts about the crust.

The Crust is composed of mainly granite, basalt, and diorite rocks

The Crust's temperature is different throughout the entire crust.  The temperatures start at about 200° Celsius and can rise up to 400° Celsius.

In the Mantle there are Convection Currents which will be defined more in The Mantle section.  These huge currents are causing the crust to constantly move.  These movements will cause earthquakes and volcanoes to erupt.  The moving of the crust is also known as The Theory Of Plate Tectonics.
Powered by